Bristol Reclaim the Night is part of the national movement of the same name, that stands in opposition to gender-based violence, and for gender equality.

Bristol SU are consistently working to improve the safety of students within the city. You can get involved by filling out the interactive map below to show us where you feel safe in the city, and where needs improvement.

On this page you can find information about our previous marches from 2015 and from 2014 as well as a toolkit to start your own march.

Why Reclaim the Night? 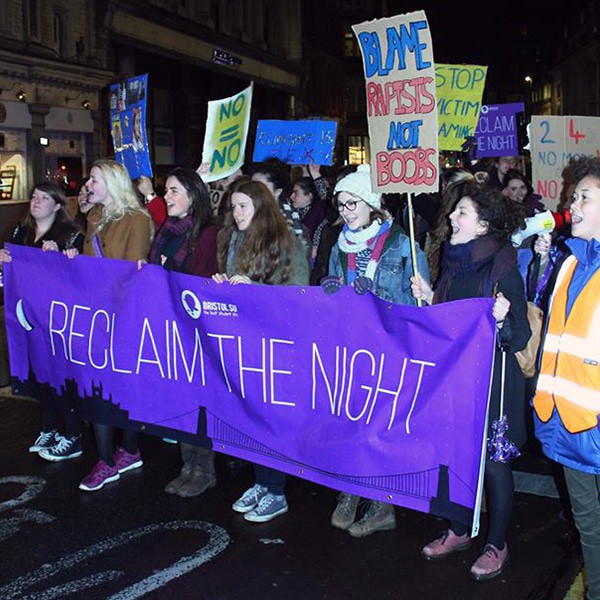 Reclaim the Night is an international movement against sexual violence, which started in the 1970s, with the first UK march taking place in 1977 as a response to the “Yorkshire Ripper” murders of women sex workers. Marches take place at night to protest against the victim blaming attitudes that tell women to stay off the streets if they want to avoid sexual violence or harassment.

Reclaim the Night 2016 was led by Women's Officer, Darcy Ramsden, and Equality Liberation & Access Officer, Hannah Dualeh, with support of the Women's Network.

To continue the important work of the campaign, we have launched an interactive map for students to tell us about their experiences in Bristol. We hope to be able to share this information with key stakeholders, such as the Council, Security Services and the Police, in order to make the city safer.

Please add your own drop pins to the map:

Reclaim the Night 2015 was led by Women's Officer, Chloe Maughan, and the Women's Network.

It was shortlisted for the Bristol SU Campaigns Award.

In November 2015 over 350 participants marched through Bristol. This culminated in an event that brought together stalls from local women's organisations, and provided a platform for local women and member's of the public to speak about their own experiences.

A Self Defence Seminar was held in March 2016 in collaboration with Krav Maga Worldwide Bristol, to empower women to feel more confident on the streets.

You can read more about the event here.

Reclaim the Night 2014 was led by the Equality, Liberation & Access Officer, Alice Phillips, with the assistance of the Women's Officer, Megan Armstrong.

Over 500 participants joined the Reclaim the Night march in 2014. You can read about it here.

The march culminated in speeches from:

Planning Your Own March

Your first step will probably be a general interest meeting in an accessible place, where you can identify the key aims and messages of your march. You can then get organising by assigning roles and responsibilities to individuals or groups.